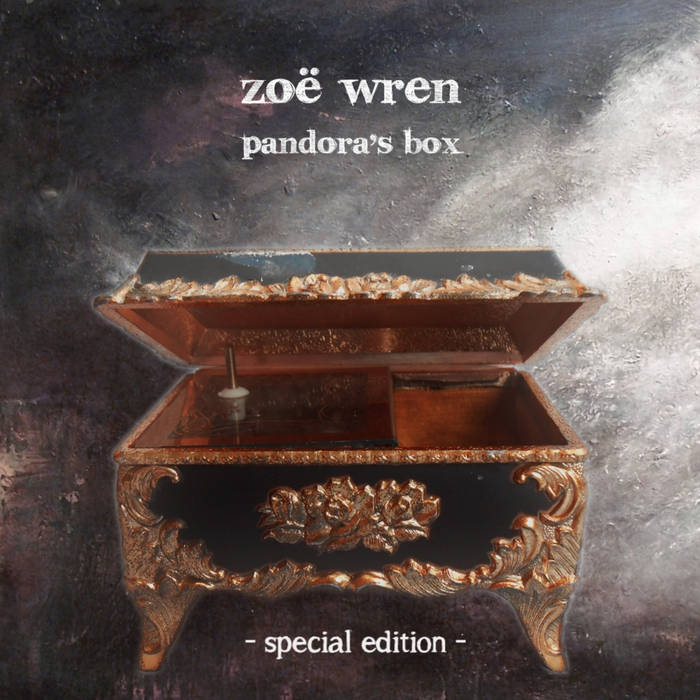 "The far reaching consequence of opening Zoe Wren’s PANDORA BOX is not as the myth goes detrimental butfo the revealing of five beautifully sung songs blending a finesse voice with the soothing tones of acoustic strumming. This debut EP is a tantalising short collection presenting Zoe first and foremost to the folk world but with lashings of potential to work the cross genre songbook. She can sing quite comfortably in the classical traditional style and still retain a contemporary charm to captivate the listener" Three Chords and the Truth threechordsandthetruthuk.blogspot.co.uk/2014/09/zoe-wren-pandoras-box-folkstock-records.html

It takes an especially strong new voice to rise above the general hubbub of the current English folk song flashmob, but there’s a sort of inevitability about the way that clarity prevails over clamour. I first heard Zoë Wren’s voice in the very early days of Instrumental and I had not forgotten it. On Pandora’s Box, she debuts impressively with a five-song set that showcases a maturing voice and songs that have depth to match their indisputable charm.

If you are already conjuring up a cloudy image of a winsome folkette with wispy tunes and the disposition of a delicate flower, then let me dispel that waking dream of yours. Zoë Wren is, arguably, very young to be treading the boards in the folk dens of London town, but not too young to write songs like those contained in Pandora’s Box. They are indicative of a personality with patience to learn a craft, but one that also has the quick wit to bend it to a purpose. Wren has made these songs as a playwright might construct a play, and it’s this visible architecture that will make people stop, look and listen. Instrumental Magazing instrumentali.com/2014/08/22/zoe-wren-lifts-the-lid-on-a-box-of-delights/

Zoë Wren is an acoustic singer-songwriter from Camden, combining traditional and modern folk styles with rock and pop influences to create a sound based on storytelling and catchy melodies.
Zoë was invited to perform on Stage 2 in Brian McNeill’s Festival Session on Saturday at Cambridge Folk Festival this year after her floor spot at the festival in the Club tent on the Friday night. She has supported various artists including Peter Knight’s Gigspanner at Cambridge Folk Club as well as Jim Causley at Hitchin Folk Club, where she has been booked three times in one season, as a result of winning the Best Newcomer award at Folkstock's Love Folk Live Awards. In 2013, Zoë also performed at Folkstock Festival and Standon Calling on the Folkstock Presents stage.
Zoë’s debut EP Pandora’s Box is being released with Folkstock Records on September 13th and will be launched at Balstock Festival. The title track of the EP, Pandora's Box is also available in the Fatea Autumn Showcase download.

Bandcamp Daily  your guide to the world of Bandcamp

Featuring Oakland sounds from the Smart Bomb collective and Samplelov.